Dush Dish Dash
Be the different

At the end of the session partcipants will be able to:


Identify challenges in the public governance

FAIR & IMPARTIAL -  Government has to be equitable. They have to treat everyone fairly and in the same way

DIFFERENTS NEEDS  - The clientele is quite segregated

2. The WGI report on six dimensions of governance for over 200 countries for the period 1996-present and are based on hundreds of underlying individual indicators drawn from from 30 different organizations, relying on responses from thousands of citizens, enterprise managers and experts.

The Six Dimensions of Governance

The WGI authors define GOVERNANCE as the traditions and institutions by which authority in a country is excercised. This includes:

i) the process by which government are selected, monitored and replaced;

ii) the capacity of the government to effectively formulate and implement sound policies; and

iii) the respect of citizens and state for institutions that govern economic and social interactions among them.

The WGI measure six broad definitions of governance capturing the key elements of this definition:

the extent to which a country's citizens are able to participate in selecting their government , as well as freedom of expression, freedom of association and a free media.

2.   Political Stability and Absence of Violence/Terrorism:

the likelihood that the government will be destabilized by unconstitutional or violents means, including terrorism

the quality of public services, the capacity of the civil service and its independence from political pressure and the quality of policy formulation;

the extent to which agents have confidence in and abide by the rules of society, including the quality of contract enforcement and property rights, the police, and the courts, as well as the likelihood of crime and violence.

the extent to which public poweris exercised for private gain, including both petty and grand forms of corruption, as well as 'capture' of the state by elites and private interests. 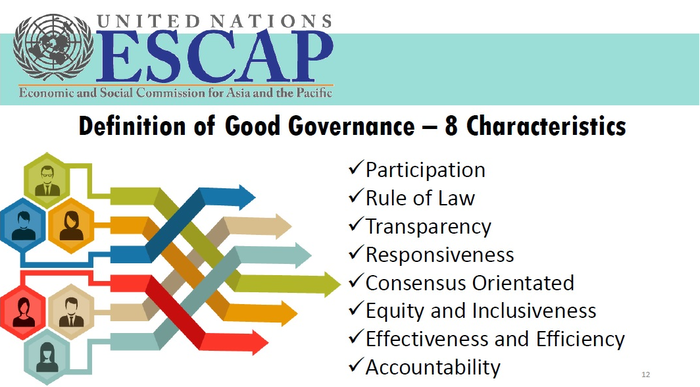